This was my soundtrack album which finally saw the light of day in Oct 2010….reviewed here by “Goodbye Crackernight” Author Justin Sheedy

I set out to review this album.  Only to find myself too busy being taken places by it.  Here’s where it took me… 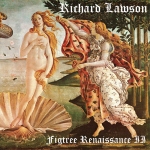 On a playful amble through my childhood, surrounded by the jangling mandolins and soon-to-be-extinct harpsichord, harmonica and bells of that time.  The Minor key all around me is punctuated with optimism irrepressible.  Discordant sirens of the future invade with ominous warning.

Sombre, symmetrical cello strains channel me down corridors to where choice is mine no longer.  Still, the violin quartet on the back seat of the school bus induces contentment unexpected, their pizzicato plucks pointing out every passing thing in the window.

This one dropped me in the midst of urgent Youth, activity unstoppable: pressing this way, that way, this way, that, and here and there and everywhere and never getting Any-where…

Track 4: To the Light

The meaning I expected here was ‘to the light’ as in that of near-death experience, yet what I felt was the light of embryonic Revelation, that moment where the harmonic strains of innocence are forever displaced by the birth of Knowing.  Though the strains of innocence left behind will always haunt.

The title here would seem to support ‘death’ imagery as the correct take on the previous track…  Mine was ‘death of innocence’.  In any case, Epitaph took me to a place of simultaneous beauty and sadness, majesty and melancholy, my path stepping ever upwards.

Here I was drawn through an ancient scape of psychedelic interval and progression – Psyche = Mind / Delos = Clearing.  To a place where Man first dared to conquer Death.

The Bach-like church organ playing on this track took me stepping tentatively down the aisle of a great cathedral.  This track should be played inside one.  Live.  It would do such a place justice.

Flying with the spirits past the windows of skyscrapers, curling, swirling all around them, can they see us?

It’s long been held that there is no sound in Outer Space as it’s a near vacuum.  This is a lie.  It is, in fact, filled with the subtle menace of the sort of classic sci-fi chords as featured on this very track.

So now you know.

This one took me to where creatures with no human name move, live and die unhurried.

Into the presence of faces no longer there: Faces poised to tell you things you simply must, must hear.  Their expression?

Into the presence of my mother.  (Gulaga is an Aboriginal Dreamtime figure from the South Coast of New South Wales:  She took the very greatest care of her youngest son.)

This track took me to somewhere I very dearly hope to be one day.

Track 14: After the Fall

To my favourite place in the world.  Where I am surrounded by gently falling snow.

I found listening to and losing myself in this album a highly emotive and enriching experience.  In response to it, I can’t apologise for describing a sequence of highly personal and subjective images and atmospheres; Figtree Renaissance II engaged me that personally.  Period.  Its creator, Richard Lawson, has recently been making inroads in the Australian Film Industry in association with Tropfest filmmakers Mat De Koning and Byron Quandary.  I look forward to Lawson’s music featuring prominently on our screens big and small, not to mention on our airwaves.

On the front cover of this album we have one of the most famous ‘beginnings’ of all time, the Birth of Venus.  In my opinion, the motif here of young Venus being born fully and perfectly formed fits Lawson’s work pretty darn well.

Justin Sheedy is the author of Goodbye Crackernight, available now through bookstores and online.  For full details, go to Crackernight.com

Richard Lawson…prolific singer/multi-instrumentalist/composer/producer/teacher /festival promoter is about to embark on his most ambitious project yet. . His 2nd Electronic album “In your face”, is an audacious love affair with Psych Folk Electronica and features queer but outstanding collaborations with the sublime Caitlin Harnett and the punchy South Coast rapper the Mighty ASH. View all posts by richardlawsonmusic